Few animals represent the forest as much as the grizzly bear. When it comes to the North American wilderness, the grizzly bear is probably the most renowned of the animals. Large, imposing and often feared, these beautiful animals have certainly earned the respect they receive from hikers, campers and others who find themselves adventuring into bear country. But much of the fear of grizzly bears comes from being misunderstood, so we thought we’d share some fun facts you may not have known.

#1 – They’re A Subspecies of Brown Bear

Although “grizzly bear” is the common name we know these bears to have, they actually aren’t their own species of bear. Scientifically, they are referred to as the North American brown bear. In that, there are four types of the North American brown bear – the mainland grizzly, the Kodiak grizzly, the Mexican grizzly and the California grizzly. Sadly, the Mexican and California grizzlies are extinct, despite the bear appearing on California’s state flag.

The history for the name “grizzly bear” is up for debate. Meriwether Lewis and William Clark first described these bears as “grisley,” which could have been an observation of their coat color having a grizzled appearance, or their overall fear-inspiring presence. Regardless of which it was, naturalist George Ord formally classified the grizzly bear as Ursus horribilis, meaning “terrifying bear,” in 1815. It was clear Ord was describing the bear’s character rather than its coat.

The Kodiak bear is the grizzly bear native to the Alaskan wilderness and they are the second largest bears in the world. They average weights of 660 to 1,320 pounds and have even exceeded 1,500 pounds. Although Kodiak bears are much larger than the brown bear species overall (ranging from 254 to 794 pounds on average; this includes both the North American and Ussuri brown bears), their diet is very much the same. 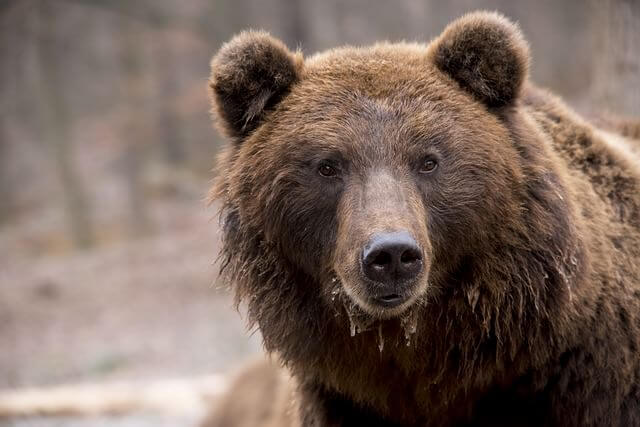 Grizzly bears prefer to spend their time alone, although they aren’t known for being extremely territorial. In fact, despite living their lives alone most of the time, it’s not uncommon to see groups of grizzly bears feeding in the same location. This phenomenon is most often seen around salmon streams and in white bark pine sites. Mothers will raise their cubs for two to three years, but will spend the rest of their lives alone as well.

#5 – They Eat A Lot Before Hibernation

On average, grizzly bears hibernate for five to seven months out of the year. To prepare for this, the bears go through a period of hyperphagia, which means they become excessively hungry and eat enormous amounts of food. Grizzly bears are omnivores and they’ll eat almost anything. Much of their diet consists of berries, nuts, fruit, leaves and roots, but they’ll eat animals from the size of a mouse to a moose. During hyperphasia, grizzlies may gain up to three pounds in weight per day as they store fat to last them through the winter months. Without this increase in diet, the bears will not survive the winter.