Did you know that Bornean and Sumatran orangutans split into two separate species around 400,000 years ago? They were only considered one species until 1996, when the differences between the two species were fully realized. Many hybrid orangutans lived in zoos as a result of this scientific misunderstanding. Both species are critically endangered due to poaching, deforestation, and the illegal pet trade. Here are 5 fun facts about orangutans.

Orangutan feet have 4 long toes and an opposable big toe, which allows them a hand-like grasp. The bones in their fingers and toes are curved to give them a better grip on branches. They can grip objects with a small diameter without using their thumbs by resting the tops of the fingers against the inside of the palm, which creates a double-locked grip. Their hip joints are as flexible as their shoulder and arm joints, giving them less restriction in the movement of their legs than humans. They don’t walk on their knuckles like chimpanzees and gorillas – instead they walk on the side of their fist.

#2 – Orangutan means “person of the forest”

The name was derived from the Malay and Indonesian words orang, which means “person,” and hutan, which means “forest.” The name was originally used to refer to forest-dwelling humans and was the result of a misunderstanding between between locals and explorers.

#3 – They build a new nest every night

An adult orangutan can make an intricate, stable nest in about 5-6 minutes. They start by locating a suitable tree, then pulling together branches under them and joining the branches at a point. After the foundation is built, they bend smaller, leafy branches onto the foundation to act as a mattress. Orangutans may also add extra features like pillows, blankets, roofs, and bunk beds. 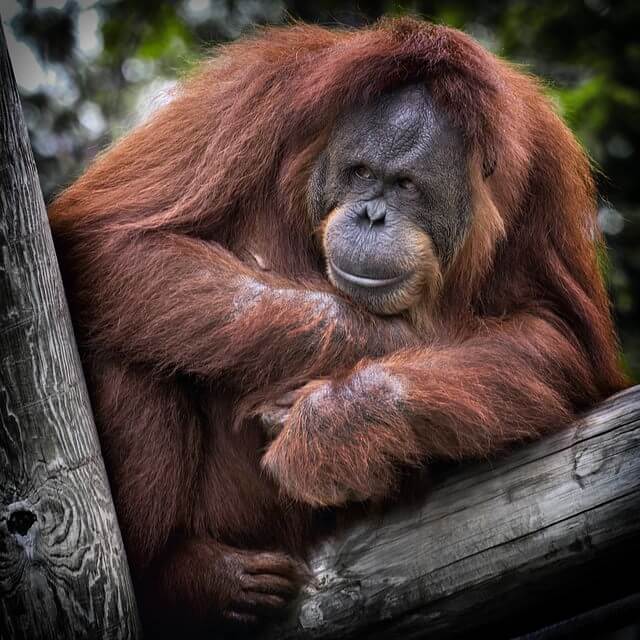 Since orangutans are opportunistic foragers, their diets vary month to month and season to season depending on what’s available. Fruit makes up 65-90% of the orangutan diet. Bornean orangutans are known to eat at least 317 different food items, including young leaves, shoots, bark, insects, honey, and eggs. They may consume anywhere between 2,000-11,000 calories a day just depending on what types of food are available.

#5 – Males are twice as heavy as females 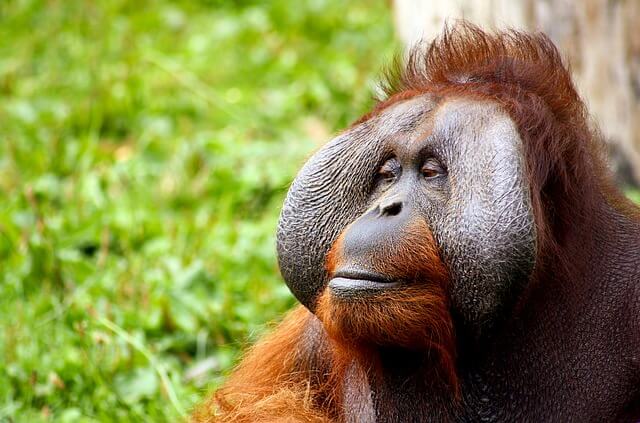 Orangutans display sexual dimorphism, which means that males and females are easy to tell apart. Dominant adult males have large cheek flaps. Females are usually around 3’9” tall and 80 pounds. Males can reach 4’6” tall and 165 pounds. A male orangutan may have an arm span that’s over 6 feet long!