Cheetahs are some of the most well-known cats in the world. These African animals are notably smaller than their lion and leopard cousins, but have their own unique set of traits that are no less impressive. Cheetahs may not be the best climbers, they don’t have the largest teeth, and they aren’t the most ferocious of big cats, but they certainly have a lot to offer the wild world. These beautiful animals once roamed throughout Africa and Asia, but are now restricted to eastern, central and southwestern Africa and parts of Iran. Work needs to be done to keep Cheetahs alive and where they belong, and there’s no better fight against extinction than education. So here are some fun facts about Cheetahs!

Cheetahs are the fastest land animals in the world. Their bodies have been designed through evolution to support incredible bursts of short-term speed that helps them catch their running prey. Reaching up to 70mph in just 3 seconds, these cats chase down their prey with the goal to knock them down and take them over quickly. Despite their speed, cheetahs must hunt intelligently – as they can only maintain these speeds for 30 seconds or less. 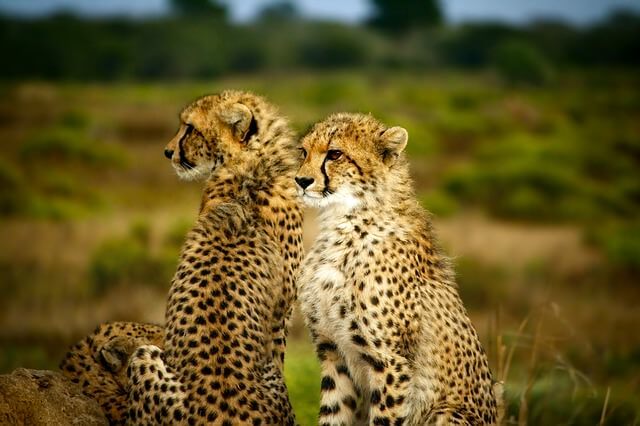 Most big cats are known for being rather solitary, with the exception of lions. Female cheetahs generally spend their lives alone, only living in a family setting when they are raising their cubs. Females stay with their babies for about one year before they are old enough to move on independently. Males, however, will often stay together for years. Typically brothers from the same litter will stick together well into adulthood. These groups of brothers are called coalitions.

Although cheetahs have never been fully domesticated, they have worked alongside humans for roughly 5,000 years. Hunting cheetahs are prized possessions by royalty in Africa and Asia – from Egyptian pharaohs, Indian Emperors and even in Normandy by William the Conqueror. Akbar the Great was said to have hundreds to thousands of cheetahs used as pets and for hunting. In fact, the earliest depictions of cheetahs hunting with humans date back to 3000 BC.

King cheetahs are unique in their markings. Instead of the regular spotted pattern seen on the majority of the animals, king cheetahs display thick stripes down their back, larger spotting overall and a plusher coat. Originally thought to be a cross between leopards and cheetahs or a separate species of their own, king cheetahs were eventually genetically tested and found to be regular cheetahs with a genetic mutation that changed their spots to stripes. King cheetahs are very rare, with an estimated 30 existing in the global population.

#5 – They’re Almost All Clones Of Each Other

Back in the 1980s, researchers were making startling discoveries that fertility in cheetahs faces serious problems. The animals are very difficult to breed and are prone to many illnesses. Studies have shown that the last ice age forced a bottlenecking of the species, leaving the remaining population almost genetically identical. Because of this prolonged interbreeding and the lack of genetic diversity, experts fear that a single illness could wipe out the entire species. The prevalence of genetic deformities in cubs accompanied by the risk for predation, only about 4.8% of cheetah cubs reach maturity. These things, along with human intervention, are causing the rapid decline of these beautiful animals.