Watching April the giraffe not give birth for over a month kept millions of people intrigued earlier this year. If you paid any attention to the press about April, you probably already know that giraffes are pregnant for well over a year and give birth to a 6-foot-tall calf. Here are 5 fun things about giraffes that you might not have heard.

#1 – Male giraffes battle each other using their necks.

This form of sparring is called “necking.” Low intensity necking involves the combatants rubbing and leaning against each other. The male who holds himself the most erect wins. With high intensity necking, the males spread their front legs and swing their necks at each other, using their heads as clubs. A well-matched pair can duel for more than half an hour. While most fights don’t lead to serious injury, there are records of broken jaws and necks and even deaths. The winner earns the right to mate with the females in the herd.

#2 – They have 18-inch-long prehensile tongues

The purplish black tongue of a giraffe is agile enough to wrap around and pluck a single leaf from a tree. The favorite tree of giraffes is the acacia, which is covered in thorns, but their prehensile tongue and lips can grab the leaves around the thorns. Just in case the giraffe does grab a thorn by accident, they have extra thick saliva to make swallowing easier. They get much of the moisture they need from acacia leaves, which is good because bending down for a drink exposes them to predators such as Nile crocodiles. 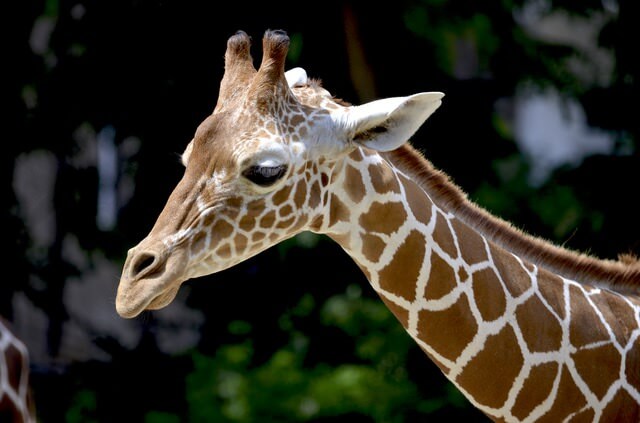 …And it can weigh more than 25 pounds. It takes a large heart with some serious blood pressure to pump blood up a 6-foot-long neck! The walls of the heart can be 3 inches thick. Giraffes also have an unusually high heart rate for such a large animal at 150 beats per minute. They have several valves in the jugular veins in their neck that prevent blood from flowing back into the head when it’s lowered, and extra thick skin on their legs prevents blood from pooling there.

#4 – Giraffes only have two gaits

Walking is done by moving both legs on one side of the body, then doing the same on the other side. Galloping involves the hind legs moving around the front legs. They use the motion of their head and neck to maintain balance and the counter momentum while galloping. They can sprint up to 37 miles per hour and hold steady at 30 miles per hour.

Just like humans, giraffes only have 7 vertebrae in their neck, but each one may be over 11 inches long. The neck takes up more than half of the giraffe’s spinal column. The neck of the giraffe’s closest living relative, the okapi, takes up less than a third of its spinal column. The massive neck needs a lot of muscle to keep it upright, which creates the “hump” on their back.