Living high in the treetops of Central and South American rain forests, spider monkeys are known for their lanky frames and incredible ability to leap from tree to tree. They’re smaller members of the primate family, usually weighing no more than 13 pounds, but their keen intelligence should not be underestimated. Spider monkeys are nimble and powerful, swinging through the canopy with breathless ease and confidence. As logging and deforestation continue to destroy their natural habitat, the spider monkey population decreases every year. The first step in helping the species is understanding them, and here are five things you might not have known about spider monkeys.

Many primates have hands much like a human’s. Chimpanzees, gorillas, orangutans, baboons, and lemurs all have thumbs, but spider monkeys are not included on that list. This may be because they simply don’t need them. Their hands are long and specially curved to hook around tree limbs, and their lack of thumbs doesn’t affect their survival. Their scientific name, Atelese, is Greek for “imperfect” and refers to their missing digits.

#3 – They almost never touch the ground

Spider monkeys are classified as arboreal animals, meaning they live their entire lives in the treetops. Their bodies are specifically built for life above the ground, and they rarely have reason to leave their lofty homes. They sleep on tree branches, forage for food among the leaves, and socialize with other spider monkeys all about 100 feet above the ground. 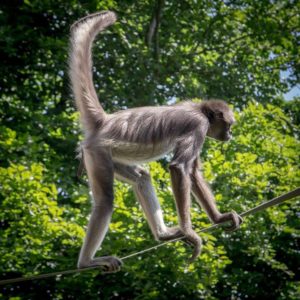 As social animals, spider monkeys live in large groups of about 30 adult females and males. They often come across other groups, called troops, while traveling through the treetops. The typical greeting between spider monkeys from different troops is a hug. Researchers suggest hugging is their way of saying, “We come in peace.” It helps them avoid confrontation and deflect aggression.

There are seven different species of spider monkey living in the wild. The black-headed spider monkey, wooly spider monkey, and brown spider monkey are listed as endangered due to their constantly decreasing numbers. Their habitat gets smaller every year, and indigenous people hunt them for their meat. There’s also a high demand for spider monkeys in the illegal pet trade. All of these factors put spider monkeys at risk of extinction, but organizations including the World Wildlife Fund are fighting to keep them around.