Found only in parts of Asia, the Asian elephant is adored by people all over the world! The people of ancient India were fascinated by them, and as a result they can be found several times in Indian religion and mythology. It’s absolutely deserved, too – elephants are incredible, respectable creatures, and the more you know about them, the easier it is to love them!

#1 – They Are The Second Largest Land Mammal Alive

The Asian elephant is the second largest land mammal alive – second only to the African elephant. Their babies are born weighing about 220 lbs. after gestating almost two years – giving them a heck of a head start! A male elephant can expect to grow big and strong, standing an average of 9 ft. at the shoulder and weighing about 8,800 lbs. It takes a lot of energy to keep all that mass moving, so an adult elephant needs about 330 lbs. of food a day! 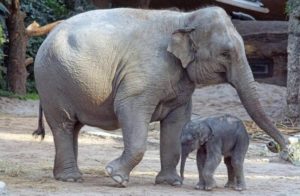 Not only is it a super-sensitive nose, an Asian elephant’s trunk also acts as an incredible multipurpose tool. Just their trunk alone contains up to 60,000 muscles. An elephant will fill their trunk and lift it to their mouth for a drink, or over their head to spray down and keep cool. When wading in water deeper than they are tall, the trunk can be used as a snorkel, sticking out above the surface of the water to keep them breathing. They’re also used to communicate, and elephant calves have been seen sucking on their trunks for comfort – the same as a human child sucking their thumb!

The Hindu god of wisdom, Ganesha, is pictured with the head of an elephant for a reason. Elephants have the largest brain in the animal kingdom – not surprising, given their size – but they also have three times as many neurons as a human brain. They have recently proven to scientists that they have self–awareness, which has only been seen in three other animals: dolphins, magpies, and great apes. They have excellent problem solving abilities, have been spotted displaying complex emotion, and even performed better than primates in their ability to differentiate numerical amounts. A particularly clever (and lonely) Asian elephant in a South Korean zoo taught himself a human language to communicate with zoo visitors and caretakers. He learned five Korean phrases, and speaks by putting his trunk in his mouth.

#4 – The Tooth Fairy LOVES Them

Elephants are polyphyodonts – meaning they don’t get an “adult set” of teeth like we do. Their teeth will be replaced several times in their lives. In a typical lifetime, an elephant’s teeth will be replaced six times. The teeth grow in at the back of their mouths and move forward, pushing out the older teeth. They get their final set, which will last the rest of their lives, when they reach their 40s.

#5 – They Use The Ground to Communicate

Elephants are very social creatures, and have been known to communicate not only through vocalizations (made with the trunk) but also by touch. Touching allows them to pick up on chemical cues given by each other. They greet each other by stroking or wrapping trunks and calves will touch their mothers when they want to let them know that they’re hungry or tired. They also communicate via seismics – frequencies too low for humans to hear. They have a muscle around their ear canal that they can use to close the ear passage, allowing them to drown out acoustic sound and focus on seismic communication. It’s said that before a 2004 tsunami a group of elephants saved their lives and the lives of the people with them when they sensed the low-frequency vibrations created by an oncoming tsunami and sought higher ground.

Although elephants are big, tough, and extra smart, they’re still being hunted for their tusks, abused in captivity, and face shrinking habitats. Asian elephants are listed as “endangered” by the International Union for the Conservation of Nature. You can learn more about elephant conservation and protection, and even adopt an elephant by visiting the World Wildlife Fund.