The distinguished white and black markings and teddy bear good looks of the giant panda make them one of the most recognizable species in the world. There are only 1,000-2,000 left in the wild, and researchers and wildlife conservationists are scrambling to help pandas thrive in their natural environment. They’re found deep in the misty mountains of southwestern China, and while they’ve been on the planet for millions of years, humans are still learning about their behaviors and habits. Here are five things you might not have known about the giant panda.

While giant pandas are technically omnivores with strong molars capable of ripping flesh, bamboo is by far their favorite food. An adult panda will spend up to 16 hours a day eating as much bamboo as it can get its paws on. They consume up to 44 pounds worth of bamboo shoots, leaves, and stems a day. They’ve also been known to eat fruit when its available, but they rarely have the energy or ambition to go after live prey. 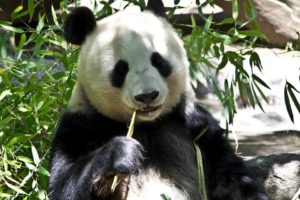 #2 – They’ve adapted because of their diet

In order to adapt to their culinary tastes, pandas have six digits on their paws. The extra digits act as thumbs to help them tear the stiff bamboo. They also have unusually wide and strong molar and pre-molar teeth that are especially adept at crushing tough plant stems. To continue the trend of adaptation, their throats have a special lining to prevent them from getting splinters.

Unlike many other species that prefer to live in family groups, pandas value their privacy. They choose to live alone, and they use their powerful sense of smell to alert them when other pandas are near. If they smell a neighbor getting too close, they purposefully move in the opposite direction to avoid interaction. The only time they seek out companionship is during the mating season when males sniff out females. 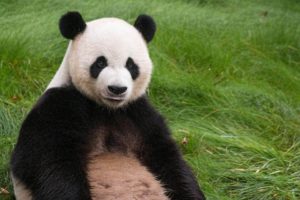 One of the reasons why the panda population is dwindling is because natural reproduction is especially difficult. Female pandas are in heat only once a year between March and May for 12-25 days at a time. During that time frame, they’re only actively fertile for 24- 72 hours. After that, the female loses her chance at becoming pregnant until the next year. Females aren’t able to give birth until they’re around six years old, and pregnancies only happen every two years. With only one cub being born at a time, sustaining the population is difficult.

#5 – Humans are the panda’s biggest threat

A panda’s massive size means they have few natural predators, but humans have pushed them to near extinction. They’re categorized as “vulnerable,” primarily due to destruction of habitat. In the past, the Chinese people believed their pelts had mystical qualities and hunted them, but strict penalties have halted this practice. Instead of guns, a panda’s biggest threat is the destruction of their homes. Humans move into their territory and cause erosion that destroys bamboo forests, and scattered residential areas prevent pandas from moving to new places.