As spring begins, so do inadvertent human and wildlife encounters. People are out in their yards and hitting the hiking trails, often stumbling on young wild animals that might appear to be abandoned or lost. But wildlife experts warn people to stay away from these adorable animals, because they probably don’t need your help. In fact, most humans trying to do the right thing are causing more harm than good, which is bad news for already declining wildlife populations around the world. 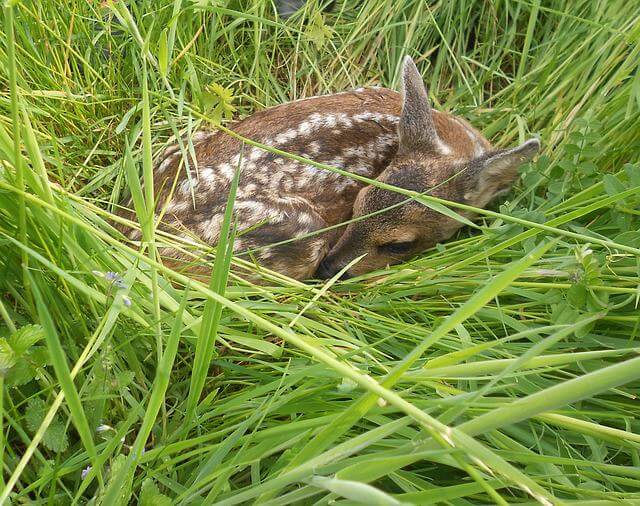 Becky McPeake, extension wildlife specialist for the University of Arkansas System Division of Agriculture, warns people that most seemingly abandoned babies are actually just waiting for their parents to return (and their parents will return, just not with you standing there) and are living out a normal part of their life stage. She states, “[…]young birds learning to fly may appear abandoned, though a parent is usually close by […] For others, it might be a natural strategy to reduce predation. A female cottontail may only visit her nest a few times a day. A fawn uses its spotted camouflage to avoid predators until its mother returns.”

If you spot an animal that wants to run away or defend itself, your best bet is to leave it alone – it doesn’t need your help. You might recall the situation just last year where tourists at Yellowstone National Park thought they were saving a baby bison, only to cause it’s mother to reject it later and it eventually being euthanized by the rangers because of an inability to re-establish the calf with the herd. These tourists meant well, but their lack of education caused the untimely death of this young calf.

Further, there are some dangers when dealing with wild animals. If you spot an animal exhibiting unusual behavior, you should steer clear. For example, a known nocturnal animal wandering around during daylight hours could be exhibiting symptoms of distemper or rabies – two diseases you don’t want anywhere near you, your family or your pets. If you are deeply concerned, it’s best to contact local wildlife officials to handle the situation.

If you accidentally disassemble a nest or den while cleaning out your yard, try your best to put it back together in a place the parents can easily find it. Caring for young wildlife is very difficult, usually unnecessary and oftentimes illegal. If you’re uncomfortable putting the nest back, contact your local wildlife rescue to take the babies in. Wild animals need very specific care and experts know how to raise them for successful reintroduction to the wild.

We all love animals and want to help them. But it’s important to understand when we’re doing good and when we’re causing harm. When it comes to wildlife, the best answer is almost always to not intervene. Let Mother Nature run her course, accept that the animal is likely safe and happy where he or she is, and call professionals to step in if you are overly concerned.